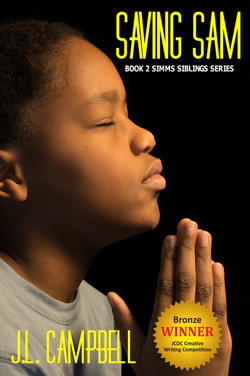 An insistent buzzing shattered Sam’s dream. His eyes popped open and he sat up straight, gripping both sides of the cot. His heart tripped with heavy, painful beats until he remembered he was safe at Downswell.

Leaning to one side, he slapped the Mickey Mouse alarm clock into silence and hopped out of bed. He slid his feet into flip-flops and picked up rag, soap and towel before hurrying to the door. A few boys stirred in the beds lined up on both sides of the dorm, but it would be a while before they woke.

In the shower down the hall, Sam rubbed bath gel over his body, spun under the stinging jets of water and got out fast.

He entered the dorm with a towel wrapped tightly around his middle. Nine other boys, including Peter, his best friend, trudged past, half of them asleep on their feet.

Everybody rose early in the Downswell Place of Safety, where Sam had lived on and off for three years. During that time, he’d been placed in several foster homes. His last stay was with the Millers and he refused to discuss that five-month stint with anyone.

Since returning from the Millers’ house, Sam was always first in and out of the showers. He never explained his need to be alone and no one asked. If anything, his housemother, Auntie B, was glad one of her charges was extra punctual.

Sam swiped both hands and feet with lotion and pulled on a pair of shorts and a tee-shirt. Then he opened the window and let in a blast of sunshine that hurt his eyes. His favourite tree beckoned from the middle of the lawn, but it was too early for him to seek refuge in its branches.

He made the bed, folded his pyjamas and placed them next to the pillow. After that, he grabbed the book he was reading from the floor, where he’d dropped it last night, and flopped into bed. Until it was time for inspection and breakfast, he needed to take his mind off things.

He opened the book, but instead of making sense, the words marched across the page like a trail of ants on a mission.

A picture of the house where he had lived in Sheaville, St. Elizabeth floated in front of him and a familiar seed of sadness took root inside him.

This slice of time during the early morning was one he disliked most. It allowed him too much time to think about the family he’d lost.

Life was better when his siblings lived in the orphanage, but Cass, Jamielle and Josh had moved out two years ago. Sam was the only one who hadn’t found a home.

Tears blurred his eyes. He dropped the book on his chest, sniffed, and dragged a hand across his eyelids. If any of the boys caught him crying, they’d tease him for the rest of his life.

Don’t be a baby, he told himself. He was better off than many orphans in Jamaica. Not all the homes were as clean and had good caretakers like Downswell. Auntie had said so after checking out several places when Daddy died.

He pulled out a photograph from the chest-of-drawers, peering at his father’s smiling dark-chocolate face and the cluster of children around him. Even though Cass, Jamie, Josh and he had Maxwell Simms’ complexion, Christine most resembled him. After his death, when the family split up, they found out why Christine had lighter skin and looked sort of different from the rest of them.

Their mother was missing from the picture, but that was fitting, because she was the reason Sam now lived in the home. The photo served as one of the few links to Daddy, but it was a terrible reminder that Sam was on his own. Auntie B’s voice dragged him back into the room. “Ready boys?”

Sam swung his legs off the bed and joined the line near the doorway. He hadn’t heard the boys return.

Auntie B was strict with them and before they filed out of the dorm each morning, she stood at the door, examining hair, nails and necks. She also smelled behind their ears, which they found hilarious.

"Laugh as much as yuh want," she’d say, "I just makin’ sure all of yuh know how to take care of yuhselves when yuh leave dis place.”

Short and round, Auntie B filled half the doorway. The boys in front of Sam got passing grades, squeezed past her and then it was his turn.

"G'mornin' Sam," Auntie B said when he stuck both hands out.

A feeble grin escaped him. "G'mornin'.”

Sam nodded and widened his grin, trying to convince her that all was well. She peered at him, eyes narrowed, but said nothing further. Auntie B had not pressed him for any information since the first couple of times she tried to find out what was troubling him. After she completed the inspection, he escaped with a pat to the shoulder.

Breakfast was corn meal porridge and cheese sandwiches, served in the canteen where they had all their meals. Sam ate the sandwich and Peter devoured the porridge. As soon as their dishes were empty, Sam took them to the counter. Then he escaped to the room to make a list of things he needed.

Today was Saturday, which meant that Christine and Auntie were coming to see him. Each time they came, he got items he’d asked for during the previous visit. He tapped the pencil against his teeth, while deciding what to write. Although his appetite had not improved since his time with the Millers, he wrote ‘snacks’, which came in handy for bargaining in the dorm.

Auntie would bring shampoo, bath gel and deodorant. She never allowed what she called ‘the essentials’ to run out. Next, he scribbled socks and briefs. He'd ask if she would buy a new knapsack, because the one he had was falling apart. He folded the notepaper with the list and put it in the pocket of his shorts, and since he didn’t want any company, he lay down and picked up the book.

While he’d lived at home, Sam hadn’t cared much for reading and didn’t read when he first came to the children's home. Cass, Jamie and Josh's leaving changed that. Reading had a twofold advantage; a book in front of his face kept others away when he wanted to miss his family in peace. The books also occupied his mind and took him away from the things he needed to forget.

He was engrossed in Harry Potter and the Order of the Phoenix when someone plucked it from his hands. Irritated, Sam hissed air through his teeth. Only one person would be so rude. He looked up at Ralph, the roommate he liked the least. Tall for his age, Ralph tended to be mean way too often.

"What you do that for?" Sam asked.

Ralph snorted. "Sun shinin’ outside and yuh in here reading.”

Sam grabbed at the book. “How that concern you?”

"Is what yuh reading anyhow?” Ralph held up the book, frowning. "Mus’ be some sissy business. Jus’ like yuh and yuh fancy words."

Sam rolled to his feet. "Gimmie my book!”

Ralph waved the novel out of reach. "What yuh gonna do, Sam, beat me up?”

Sam's fist shot into Ralph’s eye and he doubled over squawking. Sam wasn’t sure when he made the decision to hit Ralph. It just happened. Ralph barrelled toward Sam, who picked up the book off the floor and dodged.

Ralph’s weight pushed Sam off balance and they fell across the narrow bed and dropped over the side. Sam hit the floor first, the breath squeezed out of him. His head banged the metal railings on the other bed and for a few seconds, his vision went blurry. He closed his eyes, willing the throbbing in his head to stop.

Something heavy pinned him to the floor. That load was Ralph, who whacked his cheek. Stars showered before Sam’s eyes and he went blind again. He heaved upward to buck Ralph off his chest.

Ralph yelled in his face, but Sam couldn’t make out the words. Feet thundered toward them as a group of children ran in from the yard.

Sam gasped and blinked a few times. The room rippled as if they were under water. Ralph was crushing him to death. Throwing his body forward, Sam knocked Ralph aside, then hung on to the side of the bed and hauled himself upright.

Ralph stumbled to his feet, chest heaving, eyes glinting with hate. Seeing the intense expression on Ralph’s face and not knowing what else to do, Sam kicked him. The blow caught Ralph on the shin and he went down again.

Another wave of noise rose in the crowded room. Two boys hung on the grille attached to the window ledge and fisted the air.

The refrain continued and grew louder by the second. The girls didn’t add to the noise, but watched bug-eyed.

While Ralph huffed, Sam eyed him, but stayed out of his reach. Ralph lay on the floor, whimpering and hugging one leg.

A whistle blew and Sam's heart banged about as though trying to find an escape route. The room went so still, the shrill birdcalls from the yard ruled the silence.

The crowd parted to reveal Mrs. Brenda Reid, otherwise known as Brendasaurus, Chief Administrator of the Downswell Place of Safety. A frown covered her face and her lips were still pursed around the whistle.

Fighting was the one offense Bendasaurus hated more than any other.

Sam hung his head. Thanks to Ralph, he was in trouble.

Mrs. Reid blew into the whistle a second time. She stood over Ralph, hands on her hips. The whistle landed on her box-like bosom.

Nobody moved or said anything.

Mrs. Reid’s voice rolled through his name like thunder over cloudy skies.

“Speak properly,” Brendasaurus said, before turning to Sam. “Is this true?”

“Yes, but he grabbed my book.”

Mrs. Reid pointed toward the doorway. “Both of you go to my office.”

The wide-eyed spectators shuffled backward, giving Sam room to move. Ralph staggered to his feet and followed Sam, sniffling and snorting. Sam wanted to tell him to stop behaving like a pig, but didn’t dare say a word.

“The rest of you, find something constructive to do,” Mrs. Reid said.

The children left the room in a hurry as one body. Sam was sure the boys were glad to escape punishment for egging on a fight.

“Brendasaurus goin’ to kill yuh!” Ralph said, wiping his nose on the sleeve of his tee-shirt.

Sam glared at him. “Just shut up.”

He knew better than to get into a fight. Why hadn’t he done what everybody else did and just ignored Ralph?

Sam shivered and hugged himself, while wondering what Brendasaurus would do to them.